This paper presents the possibility of creating a new offshore storage terminal for liquefied natural gas and a way to reduce the cost of producing liquid air as a refrigerant for liquefaction of natural gas. 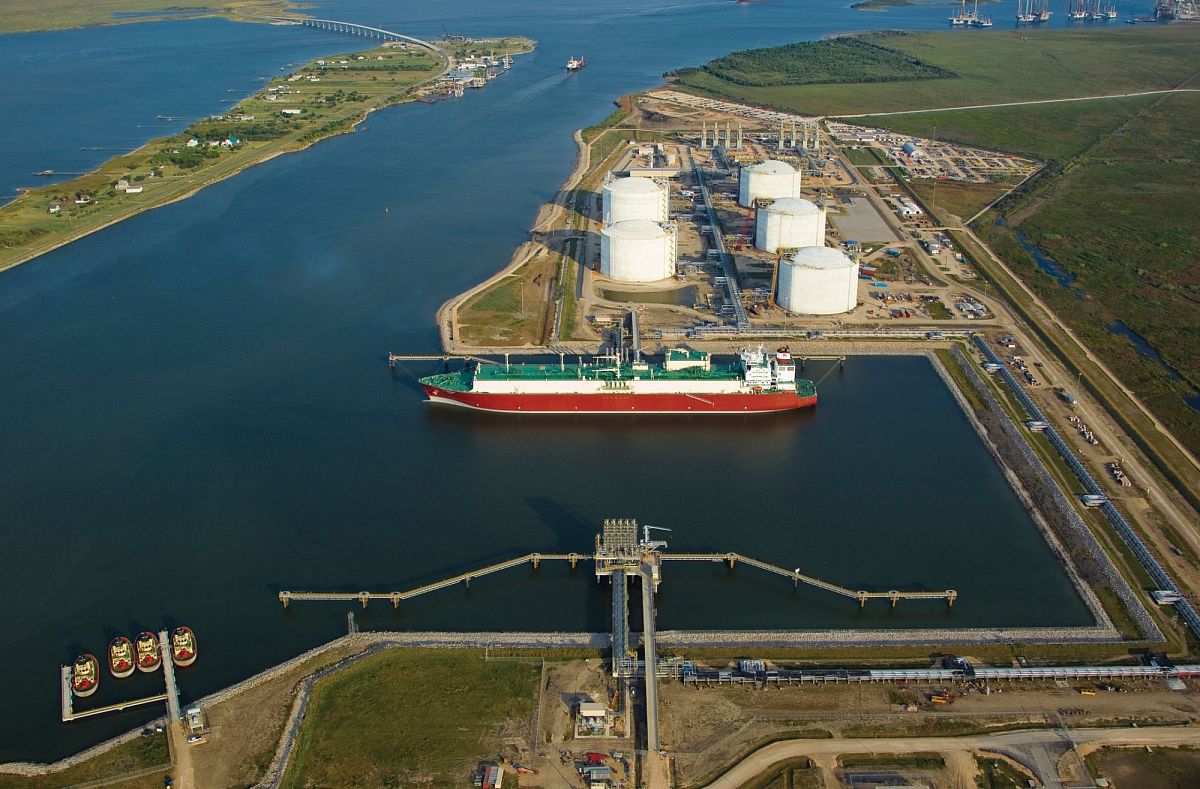 Since the time when natural gas became one of the main sources of energy in the world and the problem of its delivery to consumers by pipelines began to clearly restrain its production, gas liquefaction has become the universal solution. At present numerous technologies all over the world are used for its liquefaction. Nevertheless, the search for new technologies for liquefying natural gas (LNG) continues, and we are also taking part in it [1,2], thereby contributing to the successful diversification of gas delivery methods to consumers. It should be noted that our developments are primarily intended for the development of deep-sea long-term freezing waters of the Arctic Ocean, since traditional ice-resistant platforms, designed primarily for depths of up to 50-60m, will not withstand ice impacts; furthermore, no modern technology is designed for use in underwater conditions in order to produce and liquefy natural gas [3].

The improvement of one of our proposals for LNG production technology can certainly be implemented under the conditions of underwater natural gas production and will contribute to the efficiency of natural gas production [4]. In this respect, one of the most important components of our underwater gas liquefaction technology is the cost of the refrigerant used. In our proposed method of gas liquefaction, the main goal pursued is cost reduction and the only refrigerant is liquid air (LA), which is supplied against the countercurrent flow of natural gas extracted from productive formations. Liquefied natural gas (LNG) obtained this way must be stored in isothermal reservoirs, from which the accumulated LNG is periodically pumped to a gas tanker thereby delivering gas to the consumer. It should be noted that the delivered LNG is pumped to special reservoirs, LNG storage facilities, from where it is re-gasified if necessary for distribution into gas pipelines.

We propose to “utilize” its cold at the stage of LNG regasification, subjecting it to pumping in the countercurrent flow with forced air, which can be cooled to about minus 145-150°C, that is, the length of the cooling path must be such as to achieve the above temperature range, next, the air cooled in this manner is subjected to further cooling in order to achieve liquefaction using traditional air liquefaction technology. 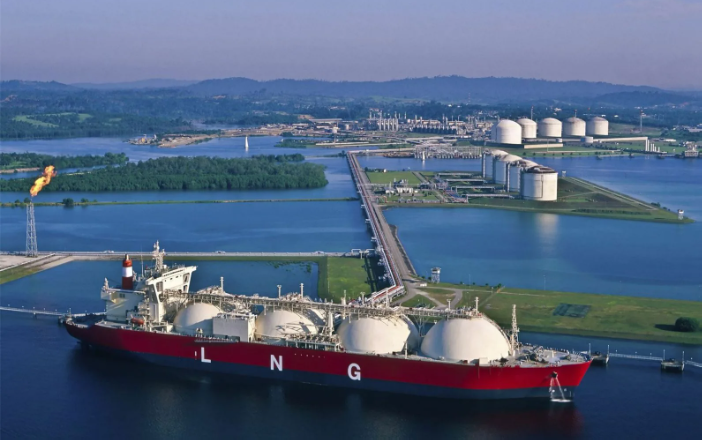 The proposed method of regasification of LNG gives us a double benefit, namely: we save the energy needed to heat LNG and cool the air to the above-mentioned temperatures as much as possible, and then we continue to further cool the pre-cooled air transforming it to a liquid state, i.e. at the final stage of air liquefaction we utilise traditional technology for air liquefaction.

In this regard, we consider it necessary to pay particular attention to the underused opportunities of LNG as a refrigerant after it is delivered to the destination port: when it is discharged, there is the possibility (in the countercurrent flow) to cool the injected air to approximately the above-mentioned temperatures, and then to bring the already cooled air in such a manner into a liquid state using the traditional method; and then pump this liquid air into a tank freed from LNG, with the tank “washed” (purged) beforehand with degassed liquid nitrogen in order to avoid the formation of an explosive gas-air mixture. This type of procedure should be carried out sequentially: tank by tank, as the delivered LNG is being released from each tank. Naturally, such a solution can significantly reduce the already low cost of liquid air (in comparison with the traditionally used multi-mixture refrigerants obtained specifically for these purposes from natural gas, which, undoubtedly, increases the cost of the target process itself). It should also be noted that the new technology for liquefying natural gas will not structurally alter the usual appearance of the tanker itself, and the only thing that will be added to the dispensing operations is the mandatory purge of all tanks with degassed liquid nitrogen in order to avoid the formation of explosive vapour concentrations of gas-air mixtures (which will require the installation of a specially designated tank for storing liquid nitrogen with equipment for its degassing before the procedure for the scheduled purge of the remaining gas tank of the LNG carrier).

The traditional offshore terminal will also be functionally modified to implement a new liquefaction technology, namely: it will be necessary to install the following:

Thus, the application of the proposed technology for liquefying natural gas through multi-stage heat transfer in the countercurrent flow with forced (pressurised) air with LNG will require additional construction corresponding to the above-mentioned units and operations at the receiving offshore complex.
The costs for the acquisition and installation of the listed equipment of the offshore integrated terminal (OIT) will naturally increase; however, the final cost of liquid air will be significantly lower than the total cost of multi-mixture refrigerants (taking into account the different types of containers for their storage, various compressors for transmission and more complex closed systems for liquefying natural gas [4]. Furthermore, the total cost of energy needed to heat regasified LNG in countercurrent flow with hot air will increase slightly, while the method we propose will certainly be much simpler than existing ones in modern LNG plants.
All other functions of the receiving terminal will not practically change, and, in our opinion, this makes a compelling argument for the construction of new (regular) plants using our method.

Essentially, construction takes place twice (firstly, in the underwater field (see [2]), and secondly in OIT), we use the cold of both refrigerants: in the field – the cold of liquid air, and in OIT - cold of LNG, which, taking into account the small size of the heat transfer process creates the advantage of our proposed innovation.

In general terms, the following elements should be included in OIT:

- a complex for the production of methanol (when using methanol as an inhibitor for hydrate formation) from methane with storage and filling into the tanker (as an option, it can also be used for receiving, storage and loading into the tanker);
- a methanol regeneration unit, including a complex for disposal of treated inhibitor solutions not subjected to regeneration;
- a unit for the production of liquid air and regasification of LNG, which allows to produce the necessary volumes of liquid air both with the use of the cold of LNG and without it;
- a complex for the preparation and supply of sales gas into the main gas pipeline;
- a terminal for loading LNG into railway and road cisterns.
- a facility for storage and offloading of liquid air into the tanker;
- an installation for the production of liquid nitrogen (LN), a storage container and a delivery system to the tanker;
- a depot for supply and repair;
- support systems (control, automation, control and emergency protection, power supply system, regular and emergency lighting system, communication system, etc.);
- a central control point for all these operations.

It is worth noting that such an approach seems reasonable provided that there is sufficient energy for the production of liquid air. A rational solution in this case is the placement of OIT in an area where adequate power capacities are present, and the production of liquid air would be carried out during periods of minimum daily power loads at minimum tariffs, which will also allow for the production of liquid air with maximum efficiency, simultaneously balancing energy consumption in the power system.
In regard to gas fields in the Barents Sea region, the first proposed OIT could be located in one of the deep-water ports of the Kola Peninsula provided that there are railways and roads and no network restrictions in terms of electric power supply. Such possibilities could be implemented on the Kola Peninsula, both in the Kola Bay and in other ports of the Arctic.

It is clear that in this case an adequate natural gas consumption market is necessary in the offshore complex region, otherwise such a market should be formed, for instance, by building a gas-chemical complex. The disadvantage of this approach is the lack of flexibility inherent in LNG as a commodity for the spot market, when LNG on the tanker can potentially be delivered to any point in the world provided that an appropriate receiving terminal is available. At the same time, the savings during production of liquid air using the cold of LNG can completely counter-balance this drawback, and in cases where the advantage of spot supply becomes obvious in terms of price parameters, this method allows liquid air to be produced without using the cold of LNG. Moreover, in both cases, underwater field and the offshore complex should have a single management system and operate as a unified technological complex in order to avoid organisational, technological or commercial disruptions during the production process.