Growth points of the russian economy

The President of the Republic of Tatarstan Rustam Nurgalievich Minnikhanov told us about what projects will be implemented in the very near future, what has been done to attract investments and what challenges the key oil and gas region of the country is facing today. 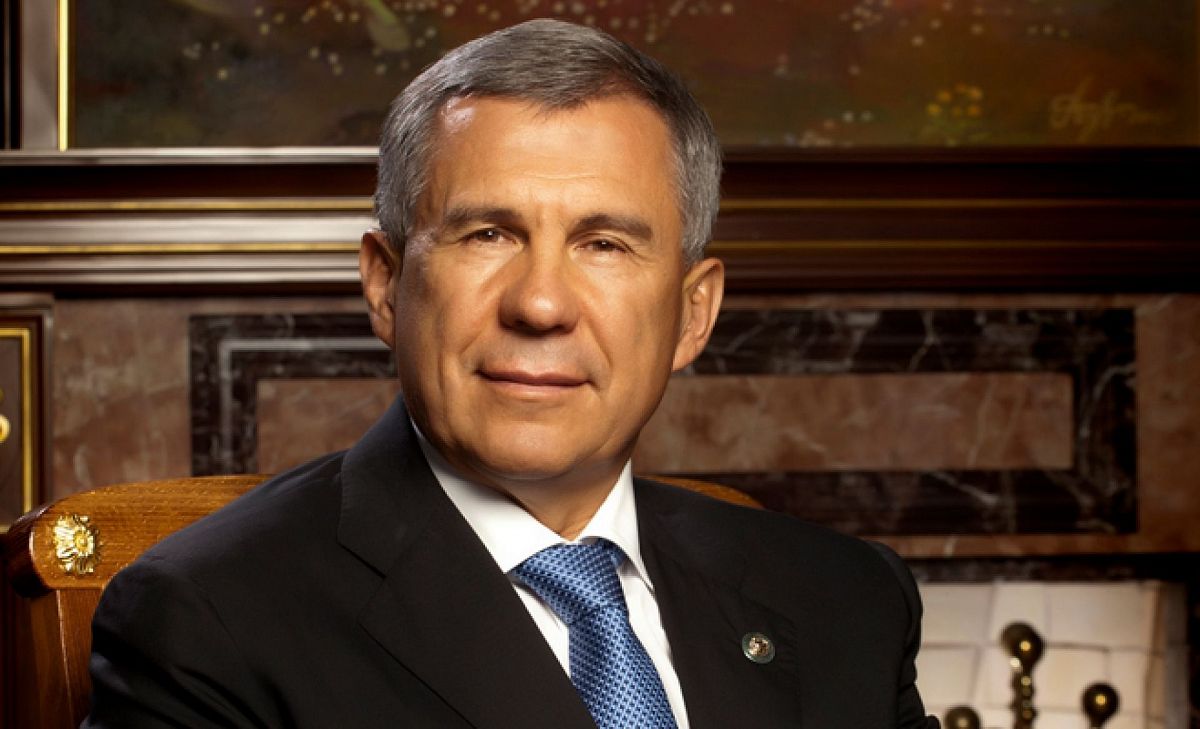 Today, the Republic of Tatarstan is one of the most economically successful subjects of the Russian Federation. Major oil & gas and petrochemical production facilities are concentrated in the Region: oil production, production of synthetic rubber, tires, polyethylene and a wide range of petrochemical products. Technology parks and special economic zones grow rapidly. In the structure of the gross regional product of Tatarstan, the share of industry is 43.2%. The President of the Republic of Tatarstan Rustam Nurgalievich Minnikhanov told us about what projects will be implemented in the very near future, what has been done to attract investments and what challenges the key oil and gas region of the country is facing today.

- Tatarstan industry is actively developing, new projects are launched, and existing production facilities are increasing their capacities. What are the main challenges the republic is facing today in the development of oil and gas refining and petrochemical industry?

- The basis Tatarstan economy and the basis of industry of the republic is petrochemical complex. This is our main growth point in accordance with the Strategy of Social and Economic Development of the Republic of Tatarstan until 2030. According to the results of 2018, the enterprises of the petrochemical complex produced 1.68T rubles worth goods, which is about 60% of the republican industrial output. In addition, the enterprises of the industry are the most active investment sector of the economy. Since 1999, 4 programs for the development of the petrochemical complex of the republic of Tatarstan have been successfully implemented. We are in the process of finalizing the fifth program, designed for the period up to 2025. Over the past years, breakthrough high-tech innovative projects for advanced refining of raw hydrocarbons have been implemented. Every year, the enterprises of Tatneft Group, TAIF Group of Companies, and small oil companies absorb more than 160 billion rubles of investment, which is 25% –30% of the total annual investment in fixed capital in our republic. In particular, in 2018, at the TANECO Complex of Oil Refining and Petrochemical Plants, four new productions facilities for the production of diesel fuel, jet fuel, and gasoline components were put into operation. The total cost of these projects amounted to 23 billion rubles. Most recently, on February 12, 2019, with the participation of President of the Russian Federation V.V. Putin another new production started at the TANECO Complex – the production of gasoline with a capacity of 1.1M tons per year. The cost of the project is more than 19.3 billion rubles. Today, TANECO is the first domestic oil refining complex of a new generation with a maximum refining depth of 99% and an oil refining capacity of 8.7M tons.

Kazanorgsintez completed the next stage of a large-scale investment program for the reconstruction of existing production facilities – in 2018 four new high-selective pyrolysis furnaces for gas raw materials were put into operation, the production of polymer concentrate, a dye, was commissioned.

For the Republic Government and the industry enterprises, the priorities in the work are the goals set by President of the Russian Federation V.V. Putin in the May decree of 2018 “On the national goals and strategic objectives of the development of the Russian Federation for the period until 2024”. In particular, this is the task of increasing non-resource exports. Petrochemical products, despite their initial hydrocarbon origin, have no relevance to primary commodities. We intend to expand our presence in the global petrochemical market, since it is the most receptive, high-tech and dynamically developing sector of the world economy. Therefore, new projects for the development of oil refining and petrochemical industry are the projects for the further development of the use of oil as the most valuable raw material for petrochemistry. Petrochemistry is one of the few industries that has been growing faster than global GDP over the past 40 years. In addition, the industry has an effective multiplicative social impact – each workplace in the petrochemical industry creates 4-5 new jobs in related industries.

Currently, Tatneft's development strategy suggests an increase in oil production until 2030 up to 38.4M tons/year along with a 100% replacement of reserves. At the same time, tasks to double the volume of oil refining at the TANECO Complex and to bring it to the level of 15–16M tons per year with a refining depth of 99% were set as a target. The priority of the organization of new petrochemical plants for the production of engineering and structural plastics, a wide range of import-substituting products of high redistribution is important in the Development Strategy of the TANECO Complex.

- Nizhnekamskneftekhim PJSC and NIIK JSC signed an agreement for the development of project documentation for the project on the construction of methanol production with a capacity of 500 thousand tons per year. What will the launch of a new production for the enterprise give?

In 2017-2018, in order to increase efficiency and reduce isoprene rubber production costs, the company successfully implemented a project on the reconstruction of production and increasing capacity of the isoprene rubber SKI-3 production from 280 to 330 thousand tons per year while simultaneously renovating productive capacities for the production of its raw components. In particular, new facilities for the production of formaldehyde, isobutylene and isoprene monomer were built and put into operation. The company is planing to further increase the capacity of the production of isoprene rubber, in general up to 1M tons capacity for the production of synthetic rubbers. Methanol is the basic raw material for the two formaldehyde production facilities operating at the enterprise. Previously, methanol was supplied from other domestic petrochemical production facilities. Thus, with the formation of a balanced methanol – formaldehyde – isoprene – monomer – rubber SKI-3 chain in Nizhnekamsk, a self-sufficient stable technological scheme will be organized, which will fully satisfy Nizhnekamskneftekhim’s need for methanol and increase the competitiveness of the company's products. Dependence on price fluctuations for purchased methanol will be excluded. It is also important that the new production adds another redistribution of hydrocarbons in the republic. About 500M cubic meters of additional natural gas will be yearly sent to refining to produce 500 ths. tons of methanol. I shall note that methanol is also a valuable raw material for the production of high-octane additives to gasoline, acetic acid, an effective inhibitor of hydrate formation during pipeline transportation of gas. The licensor of the process is our long-term technological partner in the field of catalysis and gas chemical production – the Danish company Haldor Topsoe. The design and working documentation will be developed by Research and Design Institute of Urea and Organic Synthesis Products JSC (Dzerzhinsk, Nizhny Novgorod Region), which has proven itself well during the implementation of the Ammonium Complex construction project in Mendeleevsk. The Ammonium Complex includes methanol production with a capacity of 234 thousand tons, also built on the basis of the Haldor Topsoe license.

The commissioning of methanol production facility in Nizhnekamskneftekhim PJSC is planned for 2021.

- The Republic of Tatarstan is one of the most investment-attractive regions of Russia. What investment projects are being implemented today? What areas are the most interesting for investors? What programs on the improvement of investment climate work in the republic?

Tatarstan has always been distinguished by its dynamic development, domestic political stability and investment attractiveness. Tatarstan is the leading region of Russia in the economy and industry. The republic is ranked 5th among the regions of the Russian Federation for its industrial production, 3‑rd place for its agricultural output, 4th place for investment in fixed capital. In the National Investment Climate Rating of the subjects of the Russian Federation over the past 4 years, Tatarstan has been in the top three leading regions.

Among the most investor-attractive sectors we should note oil production, oil refining and petrochemistry.

In 2018, major investors in the petrochemical industry of the Republic of Tatarstan were such companies as Tatneft PJSC, TAIF JSC , Nizhnekamskneftekhim PJSC, Septal LLC, Indel LLC, Schülken Form RUS LLC, Sheshmaoil JSC, SMIT LLC, KMPO JSC, Polychem Systems LLC and others. In particular, in 2019, TAIF-NK OJSC is completing the implementation of project on the construction of the Complex for Deep Refining of Heavy Refining Residues. This is the largest strategic investment project of the company. Due to the organization of the refining of heavy residues of primary processing, tar and vacuum gas oil, the degree of extraction of light petroleum products throughout the TAIF‑NK refinery complex will be 98% or more.

Earlier, I listed and gave a detailed description of the ongoing and promising projects at the TANECO Complex, at Nizhnekamskneftekhim PJSC, at Kazanorgsintez PJSC.

The Government of the Republic assists investors in providing infrastructure support, in reducing the length of procedures for providing state and municipal services, in reducing excessive administrative pressure from control and supervisory bodies. The main tool for improving the investment climate, attracting investment on a long-term basis for us is the development of public-private partnerships.

- The SEZ ‘Alabuga’ is the largest Special Economic Zone not only in the Republic of Tatarstan, but also in Russia. Currently, plans for its further development are being considered, including with the involvement of Chinese partners. What joint projects with the Chinese side are to be implemented? In what areas is cooperation planned?

The investors, the residents of the Special Zone see the significant development potential of the Elabuga site. In particular, an interest in the development of cooperation was shown by our Chinese partners – the largest and one of the most successful in China, Tianjin Economic-Technological Development Area (TEDA). The experts from PricewaterhouseCoopers developed a business plan for the project. Our long-term plans include joint implementation of projects in the field of petrochemicals refining, machine building and in a number of other areas with our Chinese colleagues.