Implementation of Lex Ultra-High Speed (UHS) technology in Russia and abroad is increasing despite oil prices drop and OPEC + restrictions. According to our customers’ reference letters challenges like increasing the production rate, energy saving and reliable operation in harsh well conditions are perfectly solved by the transition from standard ESP to Ultra-High Speed ESP.

Since the beginning of mass production of Ultra-High Speed ESP in 2016 (Figure 1), more than 350 units have been installed at offshore and onshore projects worldwide. During the implementation of each project, the individualities of each country and oil field have been taken into account and individual approaches with maximum flexibility supply chain have been applied. Regardless of the business cooperation model – lease or contractual – customers praised performed quality services. 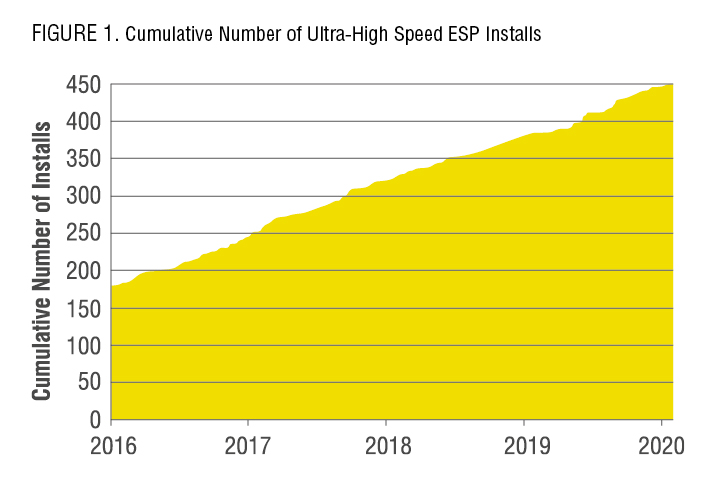 Our clients in West Siberia have been struggling to optimize well operation and maximize oil rate, but number of factors made this goal even more complicated:

• Wide operating range (Figure 2) allows to adapt to inflow changes or any technological solutions applied by the production operator, to avoid going beyond most efficient pump zone and also allows to reduce ESP models used (Figure 3) 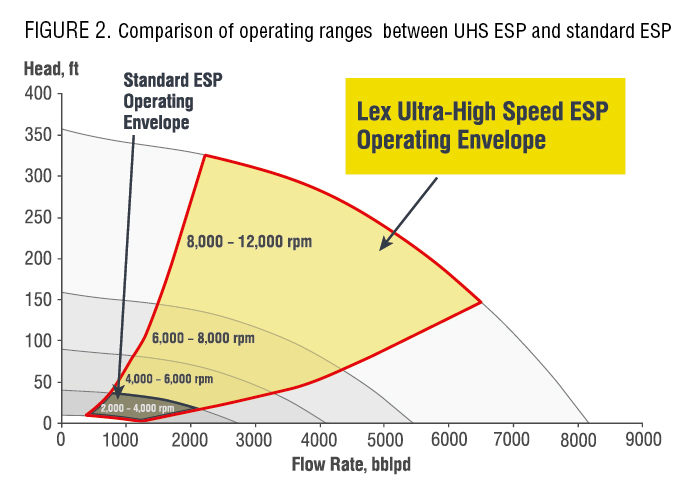 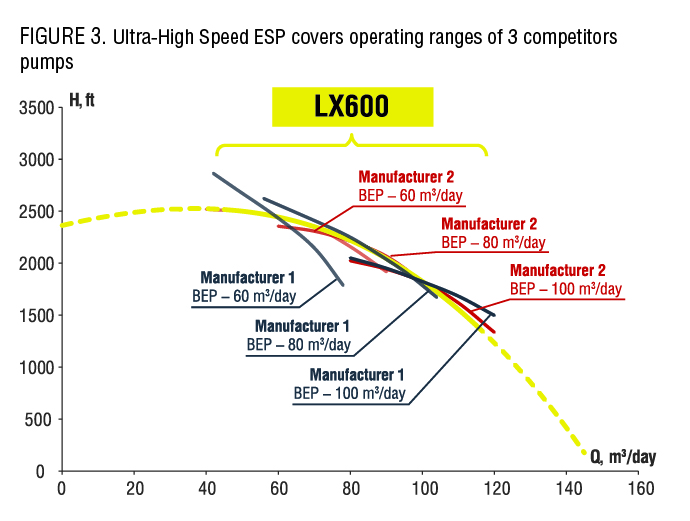 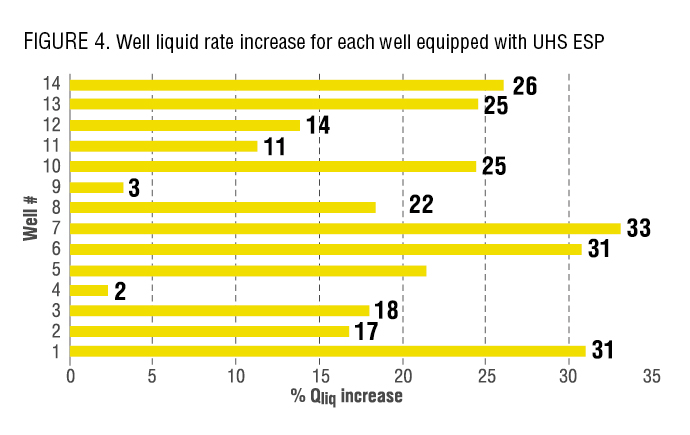 • Improved gas separator efficiency, which allows to operate with 75 % gas at the pump intake

At the time of writing the current paper the following results have been achieved:

• Oil production has been increased by 20 %

• During intermittent operation in the well with over 2000 mg/l of sand the runlife of UHS ESP has reached 1270 days (15 000 successfully operated cycles), while competitor’s equipment barely reached 300 days (Table 1).

• Total cost of ownership in comparison with competitors has been reduced by 25 % (Figure 5). 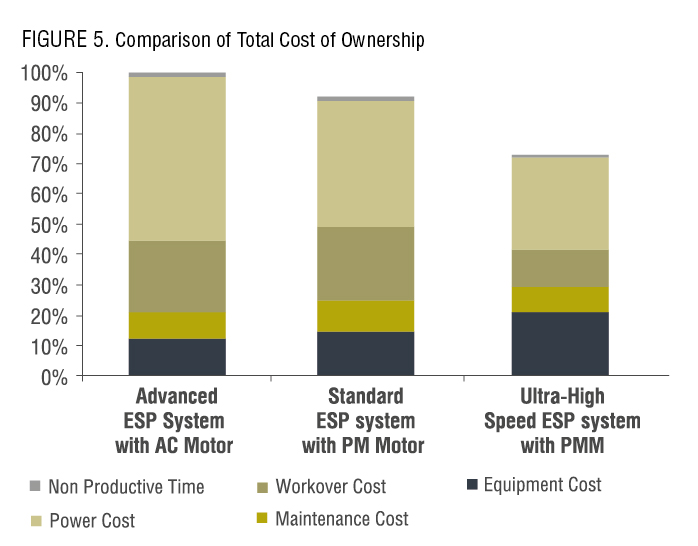 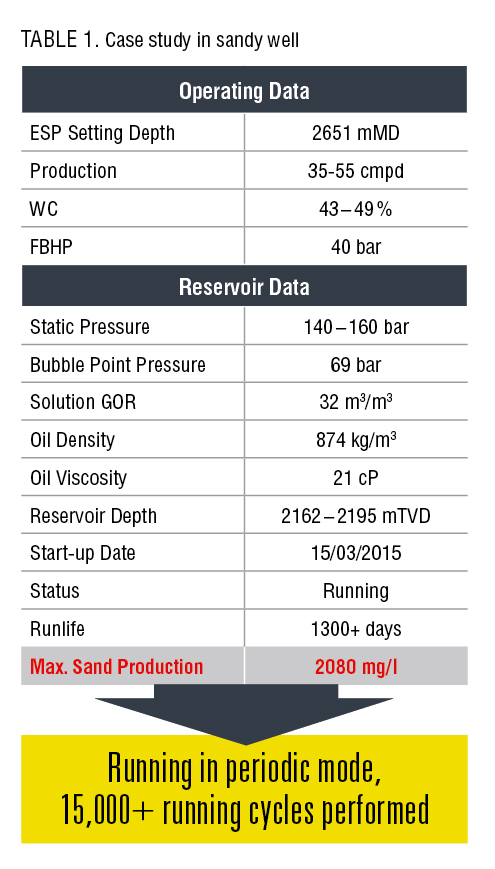 Our client in Eastern Europe for a long period of time could not find an effective technology to replace existing sucker rod pumps. In addition, the operation was complicated by the high gas content at the pump intake and unstable inflow. These factors added uncertainty to the process of choosing the right contractor.

Lex goal was to:

• Increase oil production by setting the UHS ESP below the perforation zone.

By the end of 5 successful installations in Serbia and Romania following results have been achieved:

• Pump intake pressure and bottom hole pressure have been decreased and resulted in production increase by 1.8 times


Obtained results have excelled project’s KPI. This fact was a reason to consider Ultra‑High Speed technology implementation as totally successful.

Production operator in Central Africa has reached us to optimize the well operation, which was suffering from following factors: 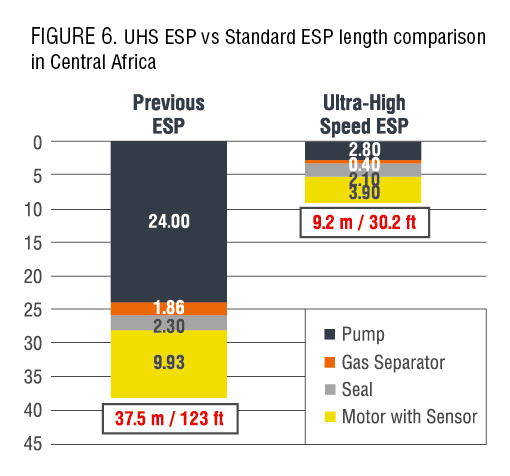 In February 2019 Lex performed an installation of the UHS ESP within 1 hour, which is 8 times faster than previous ESP installation (Figure 6). This became possible, because UHS ESP is always tested at the manufacturing facility being fully assembled. After testing UHS ESP is delivered to the wellsite and is ready for the installation, which consists of MLE connection and protectolizers positioning.

Other obtained results are listed below:

• Operating point of the UHS ESP was shifted to BEP 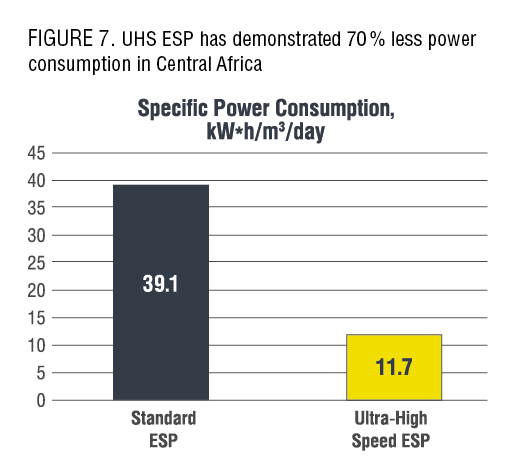 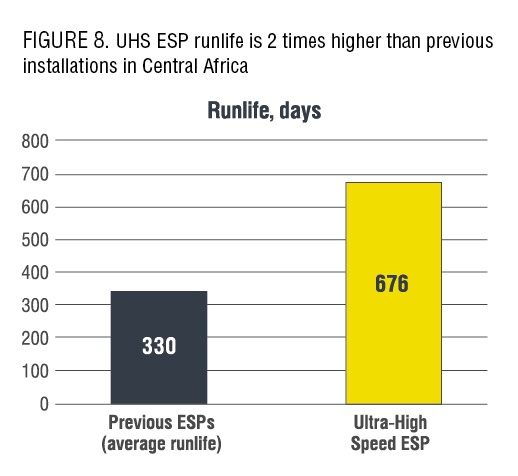 Thus, the Ultra-High Speed ESP technology has a number of competitive advantages, which are based on a deep study and improvement of each element of the system to fight against the existing problems of oil producing companies, and allows:


The advantages listed above and successful examples of Ultra-High Speed technology implementations in different regions have proved their reliability and efficiency in various operating conditions, and flexible contract models applied made this equipment available for wide usage.