Methionine production as an efficient way to process hydrogen sulfide Russia has large reserves of unique mercaptoacetate raw materials in the fields of the Caspian Sea region. The main products of the processing of hydrogen sulfide at the gas processing plants today are gas sulfur and sulfuric acid, inexpensive products, the supply on which in the market exceeds demand. In view of the high profits from the production of methionine, the authors of the article express and justify an opinion that it is necessary to develop methionine synthesis technologies from the available sulfur and nitrogen-containing substances, as well as the need to organize large-scale industrial production of methionine in southern Russia.

Today, the main products of hydrogen sulfide gas processing at GPPs are gas sulfur and sulfuric acid. These processes have been used in industry for a long time, but the cost of products is extremely small (the cost of 1 ton of gas sulfur does not exceed 5 thousand rubles, and 1 ton of sulfuric acid – 15 thousand rubles), and in the market the supply often exceeds demand, which leads to the reduction of manufacturer's profit. Nevertheless, there are high liquidity products of hydrogen sulfide processing, the cost of which exceeds 150 thousand rubles per ton, one of which is an indispensable amino acid widely used in the industry, methionine (2-amino-4-(methylthio)butanoic acid, figure 1). 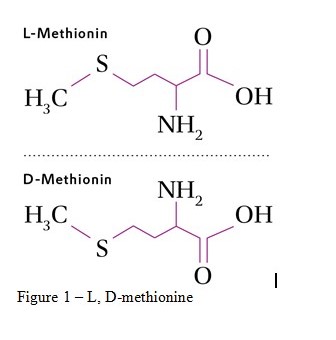 Like any amino acid, methionine is an expensive product that is mainly used in the production of modern compound feeds for agriculture, as well as in the pharmaceutical industry, therefore the main consumer of methionine is the production of premixes and ready-made feeds for livestock, poultry, and, most recently, fish farming. This is due to the fact that the basis of the protein part of modern feeds is soy protein, which is deficient in sulfur and to obtain stable weight gain it is necessary to add methionine to the protein concentrate. It should be noted that methionine is added to the composition of sport nutrition, which also expands the sales market.

It should be noted that methionine consumption is closely related to income level and preferences in meat food of people living in countries (figure 2). 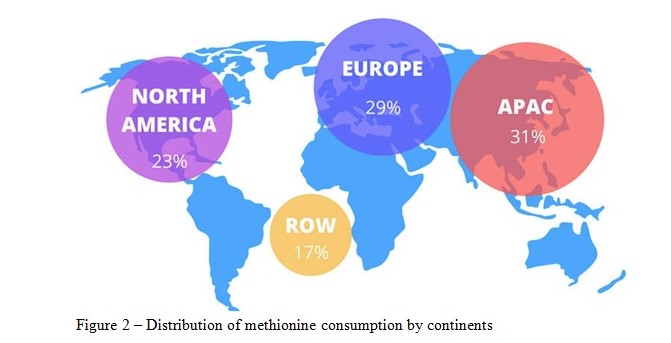 In light of the increase in wealth and, as a result, the consumption of meat products in Asia, this continent is the leader in consumption of this amino acid, the use of which exceeded 390 thousand tons in 2018. However, the European market will be developing and by 2025, consumption will exceed 500 thousand tons, which is associated with an increase in livestock efficiency and feed structure optimization. Thus, the methionine market will not be excessive in supply and is relevant for new players.

A feature of methionine is the availability of two stereoisomeric forms – L and D (these forms are specularly reflected). In many organisms of living beings only the L-form can be taken up, and that is what the body use to synthesize hormones, ferments and proteins, and to use the D-form, it needs to be converted to the L-form. Currently, the main capacities are synthesizing methionine by chemical means using multistage chemical synthesis and using acrolein, hydrocyanic acid and methylmercaptan a mixture of isomers is obtained, despite the increased cost of pure L-methionine. Therefore, the release of L-methionine, which is synthesized enzymatically, as a more expensive product, to the market is also relevant.

In industry, there are two methods for the synthesis of methionine – biotechnological and chemical. The general principle of the first method is based on the artificial cultivation of a certain type of strain in a nutrient medium with a constant carbon source, for example, starch syrup. Bacteria with disturbance in nitrogen metabolism secrete one amino acid in large quantities into the fermentation solution, after which it is isolated using chemical method. On the one hand, the fermentation method is quite simple, it is performed on small-sized equipment, carried out in one or two stages, and ecologically harmless. But on the other hand, microorganisms are very sensitive to changes in process conditions, in particular to pH, temperature; in addition, the method has a low selectivity, due to which the concentration of the obtained α-AA (amino acid) is rather low. Therefore, this method is not so widespread in large-scale production.

Chemical synthesis is more versatile and gives a much greater output and better quality of the target product. But the process is multistage, requires large amounts of capital and energy. The determining factor is usually the economy. As practice shows, in large-scale industrial production, chemical synthesis is justified. At the moment, there are several patented methods for the chemical production of D, L-methionine. Various organic and inorganic compounds (propylene, L, D-homoserine, hydrocyanic acid, ammonia, potash, alkalis) can be used as reagents, but in all methods at the initial stage of the synthesis the main participant is gas raw material (propylene and mercaptan), and of all the homologues of mercaptans, only methylmercaptan is used. Methylmercaptan with acrolein is converted to 3-methylthiopropionic aldehyde. This operation can be organized directly at the plant receiving the natural methylmercaptan, which will exclude the transport of toxic mercaptan.

Considering that methionine can be attributed to large-tonnage products, large-tonnage chemical synthesis plants (table 1) predominate, however small-tonnage fermentation productions appear too. Despite the official interviews of the representatives of companies about the benefits of classical methionine synthesis, all of them have a large baggage of patents on fermentation synthesis and are expanding it. Thus, the fermentation method is currently promising, especially with relatively small production volumes. However, despite the high concentration of capacities, the price of methionine amounted more than 180 thousand rubles per ton with fluctuations corresponding to the cycles of production and consumption of animal protein. Currently, cost indicators are similar, and therefore there are no prerequisites for reducing the price of amino acids and the profits of methionine synthesis production. 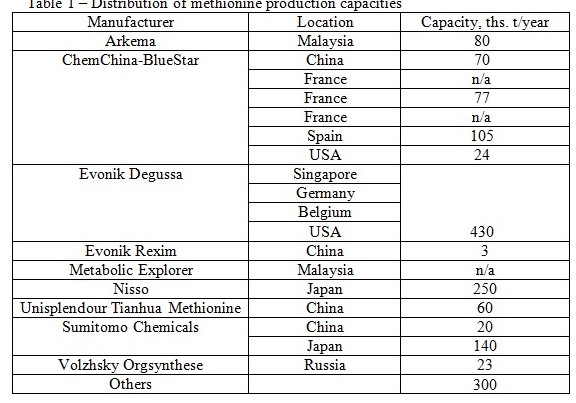 However, in Russia, the production of sulfur-containing amino acids is traditionally limited and existing production does not significantly increase product output, and given the introduction of new and modernization of existing facilities for highly productive poultry and livestock, imports of methionine are growing annually.

Russia has large reserves of unique mercaptoacetate raw materials from the Caspian Sea region and these resources (30 thousand tons/year) are at the level of their global production by synthetic means, therefore, the organization of large-scale industrial production of methionine in southern Russia should be considered first. In this case, taking into account the low cost, it is possible to consider methionine synthesis not only for domestic market, but also for export, which creates an economic effect due to the high conversion of hydrogen sulfide.

Considering the high profits from methionine production and the existing market niche, methionine synthesis technologies should be developing from available sulfur and nitrogen containing substances (hydrogen sulfide, mercaptans, urea, ammonia), which are produced at gas processing and gas chemical enterprises of Russia, and methionine production plants can be integrated into existing productions both to reduce capital and operating costs, and to reduce the release of cheap gas sulfur or sulfuric acid.